Core vs CPU vs Socket vs Chip vs Processor Difference Comparison

Since the advent of multi-core technology such as dual-cores and quad-cores there is confusion regarding what a microprocessor consists of and what is the correct terminology. Here we analyze and compare  core vs cpu vs socket vs chip vs processor to define what each of these components or term represent.

Since standard microprocessors are starting to hit the heat barrier, switching and leakage power of several transistor chips are so large that cooling becomes a primary engineering effort and a commercial concern (Note: For a given semiconductor process technology, power dissipation of a modern CPU is proportional to the third power of clock frequency). On the other hand, the necessity of an ever-increasing clock frequency is driven by the insight that architectural advances and growing cache sizes alone will not be sufficient to keep up. Processor vendors therefore started looking for a way out of this power-performance dilemma in the form of multicore designs. Essentially a core comprises of a logical execution unit containing an L1 cache and functional units. Cores can independently execute process threads.

Chips or Microprocessor or CPU

A chip or CPU chip refers to the actual integrated circuit (IC) on a computer. A chip mainly refers to execution unit that can be a single core technology or a multicore technology.

The socket refers to a physical connector equipped with leads or pins on a computer motherboard that accepts a single physical chip. Many motherboards can have multiple sockets that can in turn accept multi-core chips.  Typical desktop PCs have a single socket, while standard servers use two to four sockets that share the same memory. 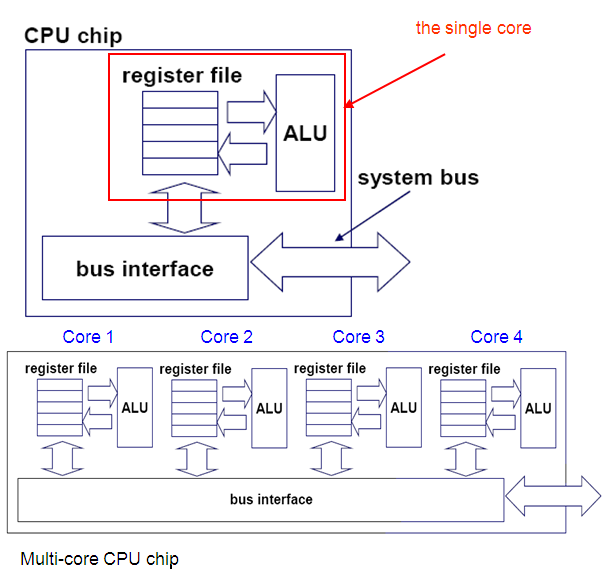 Core vs CPU vs Socket vs Chip vs Processor

To get a quick understanding remember that a socket is actually what the CPU chip is connected into via pins and leads and in common language it refers to the chip itself. A core is a full blown CPU sitting on the chip. Basically single socket (chip) may have 1 (one), 2 (two) or 4 (four) cores on it.